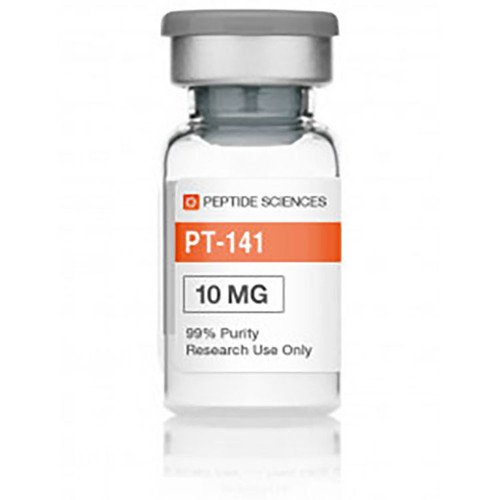 PT-141 (also known as Bremelanotide), approved for use by the FDA, is a melanocortin-based peptide used for the treatment of low sexual desire in women (calm down), and may also address problems of sexual interest (libido) among men who have altered or disrupted hormonal states. It may be used as an alternative to Viagra or Cialis in men with low sexual drive and ED associated with a lowered libido. However, it has also been known to have the favorable side effects of an increased sense of strength, sex drive and vitality.

PT-141 was originally tested as a sunless tanning agent, (NOTE: this is a potential risk of overuse) but it also seemed to cause sexual arousal and spontaneous erections in 9 out of the 10 original male volunteer test subjects. Melanotan II was produced to stimulate melanogenesis, the process that is responsible for skin pigmentation. Melanotan II was also known to suppress appetites and enhance libido, in addition to promoting skin tanning.  In fact, it's a reasonable option for men who participate in body building competitions, as they can get darker skin faster and have more energy to power through their workouts.

How does it work?

Unlike Viagra, Cialis, Trimix and other similar medications, it does not act in the vascular system, but directly increases sexual desire within the nervous system. It stimulates and activates the dopamine hormones that happen to play a major role in sexual motivation. Dopamine is a known compound in the body, it’s a neurotransmitter that stimulates performance. When you have low levels of dopamine, your libido is lowered.

PT-141 is administered as a subcutaneous injection (not unlike the way HCG or Sermorelin are injected) that's given 1-4 hours before playtime and it's effects on sexual desire and spontaneous erections typically lasts anywhere from 8-24 hours. Like other hormonal influencers, it should be kept refrigerated. Watch this brief video on How to perform a Subcutaneous Injection

Self-limited episodes of headache, nausea, and flushing were experienced by some study participants, effects which abated when the dose was lowered. It was noted that the headaches experienced from well-known ED medications like Cialis and Viagra were more intense and lasted far longer than those who experienced them with PT 141.

Filled with inert gas or in a vacuum

Never store in sunlight (UVC rays will damage the compound)

Long term storage should be frozen

Once mixed with water must be refrigerated never frozen

Shipped from the UK

This product can be shipped worldwide

This product is not: