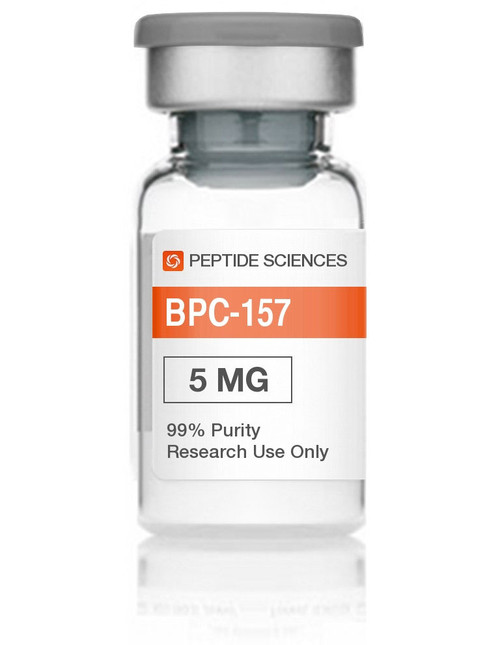 Over the counter supplements for joint health such as glucosamine and chondroitin have been subject to skepticism over the years. BPC-157 offers a new and exciting route in the treatment and prevention of joint issues, as it appears to catalyze regenerative effects both on a cellular and hormonal level. BPC might represent a quantum leap in advancement for treating injuries and enhancing vitality/performance.

Stable gastric pentadecapeptide BPC-157 is is a synthetic peptide chain. A peptide is simply a sequence of amino acids. BCP specifically is composed of 15 amino acids derived from a protective protein found in the stomach. BPC, short for 'body protective compound', is already found in human gastric juices in small amounts to heal the gut, but can be taken supplementally to benefit anywhere in the body. BPC-157 is a cytoprotective compound, meaning its actions include aiding the healing process including remodeling and protective effects. It can also protect against oxidative stress.

BPC has been found by multiple studies to have a significant effect in stimulating angiogenesis – the production of new vessels by modulating a growth factor known as VEGF. What this does is encourage the growth of capillaries into new areas, and this in turn enables blood, and henceforth nutrient, delivery to that area – a process which drives healing.

The growth hormone stimulating properties of BPC-157 has also been suggested to stimulate cell growth. When applied to areas such as the joint tendons, this could lead to not only the tendon healing but total regeneration over time and also a reduction in joint pain and inflammation (Chang et al. 2011, 2014).

In addition to the benefits it appears to deliver in terms of joint health, it appears to aid healing in other areas of the body. A reduction in inflammatory intestinal markers after BPC-157 usage was linked to an improvement in conditions such as fistulas and short bowel syndrome (Grgic et al. 2016). One study even demonstrated that BPC-157 may help ameliorate damage caused by Parkinson's Disease (Sikiric et al. 1999) while a second study showed a reduction in brain damage caused by multiple sclerosis (Klicek et al. 2013)

It represents a massive jump in performance enhancement, not just in terms of joint healing but also its ability to reduce damage in organs, bones, the digestive tract, have neuroprotective effects and even improve stomach ulcer recovery.

Most of the research we have on BPC right now has been conducted on animals or isolated cells. Despite these, anecdotal evidence is overwhelmingly positive and supplementing with BPC following injuries or surgeries is becoming increasingly more popular, especially in those who want a fast return to training such as powerlifters and bodybuilders. With a long list of benefits of BPC-157 supplementation and usually only a fairly low cost, it is certainly something to consider when other supplements and therapies have failed.

There have been many positive effects noted by those who have experimented with the use of BPC-157 for issues including bone healing, ligament healing, general regenerative properties and more. We will list just a small few of the key health benefits here.

BPC-157 side effects (if any) are usually mild, especially when used at the proper dosage. Regardless, it is worth noting that research on BPC is still limited. We can however look to side effects associated with other peptides to hypothesize what we might need to look out for.

BPC-157 is generally considered safe for use. As it is naturally found in gastric juices, it should be well tolerated by the body in theory. It is however important to note that human clinical trials are still limited and side effects, as above, have been reported. We cannot say for sure long-term use implications may be at this point. As with any supplement in this stage, we would advice ceasing use if any concerns to arise.

As far as tested athletes are concerned - BPC is not currently on the WADA banned list under the section naming “peptide hormones, growth factors, related substances, and mimetics” (as of October 2020). This means that natural bodybuilders and sportspeople might use it without risk of bans.

The typical BPC-157 dosage for intramuscular injection is 200 to 300 micrograms (mcg) per day, in a single daily injection, taken consistently each day for up to 4 weeks. This works out to around 2.5 to 3.75 micrograms per kilogram of body weight for an 80kg adult, but as little as 1mcg/kg has been studied to provide benefits.

Dosage for oral administration may need to be higher to take into consideration the amount of drug that will be lost in the digestive tract, but is still an effective way to take BPC, especially if uncomfortable with injecting. Our suggested supplement would be Unbreakable by Hydrapharm which contains a blend of synergistic ingredients for supercharged recuperation.

Like any supplement, we'd suggest starting with the lowest effective dosage and monitoring your response and results over time.

Consult with your healthcare professional before looking to treat or manage any illness or injury yourself with supplements including BPC.

BPC-157 is not a steroid. It is a peptide, or chain of amino acids. It does not have the anabolic or androgenic effects of AAS. Instead, it may assist athletes by assisting the repair and regeneration of muscles and connective tissues among other benefits.

BPC does not directly build muscle, however in bodybuilders looking to optimize recovery between sessions and stay injury-free, it can increase how frequently you can train to a high intensity without having to take a step back.

BPC is short for “Body Protection Compound”. BPC-157 is a synthetic strain of Peptide extracted from a protein found in the gastrointestinal tract in a highly concentrated form.

You can indeed take BPC-157 orally with capsule supplements such as Unbreakable by Hydrazine utilizing orally-active BPC. A higher dose may be needed to achieve the same results but this is preferable to many and avoids risks associated with self-injecting.

You might see results from BPC-157 in as little as 24-48 hours, depending on the severity of the injury it is being used to treat. If you do not immediately see the results you want, we'd suggest waiting a week or two before thinking about adjusting dosage.

In rats, BPC 157 actually stabilized blood sugar. Only when combined with l-arginine did it increase blood pressure. We do not currently have enough evidence to confidently say whether this would be replicated in human subjects.

BPC does not need to be injected at the point of injury (for example, if the pain is coming from the achilles tendon). This is why whether you inject subcutaneously, intramuscularly, take BPC capsules orally or use a spray it is effective. This is one of the reasons that makes peptide therapy so appealing to athletes.