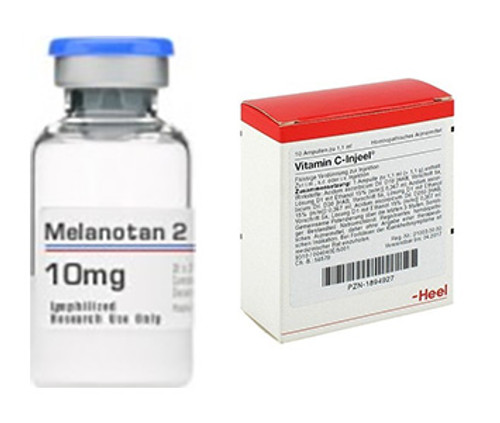 1 x Syringe (for mixing your solution)

Vitamin C (aka L-ascorbic acid) is one of the most talked about vitamins. The nutrient gets special buzz for its immune-boosting potential. But touting vitamin C's ability to shorten the common cold only scratches the surface of its role in the body.

This antioxidant isn’t naturally made by the body, so it’s crucial to obtain it from vitamin C–rich foods, according to the Mayo Clinic. “Vitamin C can be found in a variety of foods, including red and green bell peppers, citrus fruits, kiwi, broccoli, tomatoes, and Brussels sprouts,” says Tamar Samuels, RDN, a cofounder of Culina Health in New York City.

Adult women need 75 milligrams (mg) of vitamin C per day, and adult men need 90 mg, according to the National Institutes of Health (NIH). Most Americans source enough of the nutrient through diet alone.

The body depends on vitamin C for the synthesis of collagen, which is found in connective tissue around the body, according to the  NIH. “Adequate vitamin C levels are essential for the production of collagen,” Samuels says. “Collagen is the most abundant protein in the body and plays a critical role in connective tissues like those found in our organs and of course our hair, skin, and nails.”

You may know collagen as the skin’s anti-aging savior as some health and beauty experts portray it. A study published in September 2015 in Clinical, Cosmetic, and Investigational Dermatology found that topically applying vitamin C to the skin led to increased collagen production and younger-looking skin. The increased collagen synthesis also means vitamin C helps wounds heal, according to Oregon State University.

Another plus to vitamin C is how it interacts with other vitamins and minerals in the body, such as iron. Iron supports proper growth and development, aids the body’s ability to deliver oxygen throughout the body, and helps make certain hormones, according to the NIH. Nonheme iron, which is the type of iron found in plants, can be tricky for the body to absorb, but eating vitamin C (and ideally heme iron, which is commonly found in meat and seafood) at the same time as nonheme iron leads to better absorption, according to Harvard Health Publishing.

3. It Plays a Role in Enhanced Brain Function

“Vitamin C also plays a role in neurotransmitter synthesis and cognitive function,” Samuels says. Neurotransmitters are important for sending messages from the brain to the rest of the body, according to the University of Queensland, in Australia. And more vitamin C may be associated with increased brain function. A systematic review published in September 2017 in Nutrients found higher vitamin C concentrations in cognitively intact study participants compared with those with impaired cognition

Many of the benefits of vitamin C can be traced to its antioxidant properties. “Antioxidants act to neutralize free radicals, which are volatile and harmful substances produced in the body that cause damage to cells and tissues,” Samuels says. According to the Mayo Clinic, antioxidants can protect against the development of serious health conditions, such as cancer or heart disease. More studies — especially ones involving human participants — are needed, however, to show whether vitamin C specifically can prevent cancer or cardiovascular disease, per Harvard T.H. Chan School of Public Health.

Perhaps vitamin C’s best-known benefit is the positive effect it has on the immune system. In a review published in November 2017 in Nutrients, vitamin C was found to support the immune system by protecting against oxidative stress, aiding in microbial killing, and decreasing the potential for tissue damage. A deficiency in this vitamin has been shown to increase the rate of infections. It’s unlikely that loading up on vitamin C once you start sniffling will keep you from getting a cold, but it could help you recover more quickly, according to a prior review.

The Mayo Clinic notes that eating a diet filled with vitamin C–rich fruits and veggies appears to reduce the risk of certain types of cancer, but research isn’t clear about whether that’s directly related to the vitamin C content or the result of following a healthy diet more generally. Overall, the research regarding vitamin C’s role in cancer prevention is inconclusive. A meta-analysis published in November 2015 in the Korean Journal of Family Medicine, for instance, determined there’s no link between vitamin C supplements and cancer prevention.

But it seems vitamin C may make radiation and chemotherapy more effective when taken intravenously in extra-high doses, according to the Mayo Clinic. A February 2019 study published in Anticancer Research found high doses of vitamin C helped fight breast cancer cells when combined with anti-cancer drugs. One big caveat: The study participants were receiving extremely high doses of vitamin C that people shouldn’t expect to get through diet and supplements at home. “I recommend speaking with an oncologist about their experience with patient outcomes,” Samuels advises for those interested in the possible benefits. “Typically, outcomes depend on the individual's type of cancer, severity of cancer, and overall health status.”

The American Optometric Association notes that vitamin C can lower the risk of developing cataracts and can also help slow the progression of age-related macular degeneration (AMD). Specifically, previous research has found taking 500 mg per day as part of a daily supplement slowed the progression of the disease among people with moderate AMD, likely because of its antioxidant properties. Yet it's best to discuss with your ophthalmologist or primary doctor before taking any supplement long term.

How to Mix Guide